On my vacation to visit my dad and his wife-they took us to this amazing restaurant where they had pretty much Cuban sandwiches and about two dozen presses (mostly Letterpresses) and some amazing vintage typewriters. This sweet little joint was right across from the Sugar Cane mill in Old town Homosassa, Florida. I was amazed at the diversity of what went on in that little building. Apparently, the owner (who was not there)  can fax, notarize and print documents, has a Blues and Barbeque fest every year, and this crazy printmaking establsihment all in a restaurant the size of maybe….1600 square feet.

Among the notable presses, Heidelbergs, KLUGE’s and many varieties of Vandercooks, sat a sweet little Cleveland made Chandler and Price. Felt right back at home. This was a very cool enterprise to come upon in the middle of Florida’s nature coast. I have had a really nice time with family-swimming, relaxing, tanning and smelling the sun shine state’s ink-always making me think about how many great little print shops exists out there in the world. 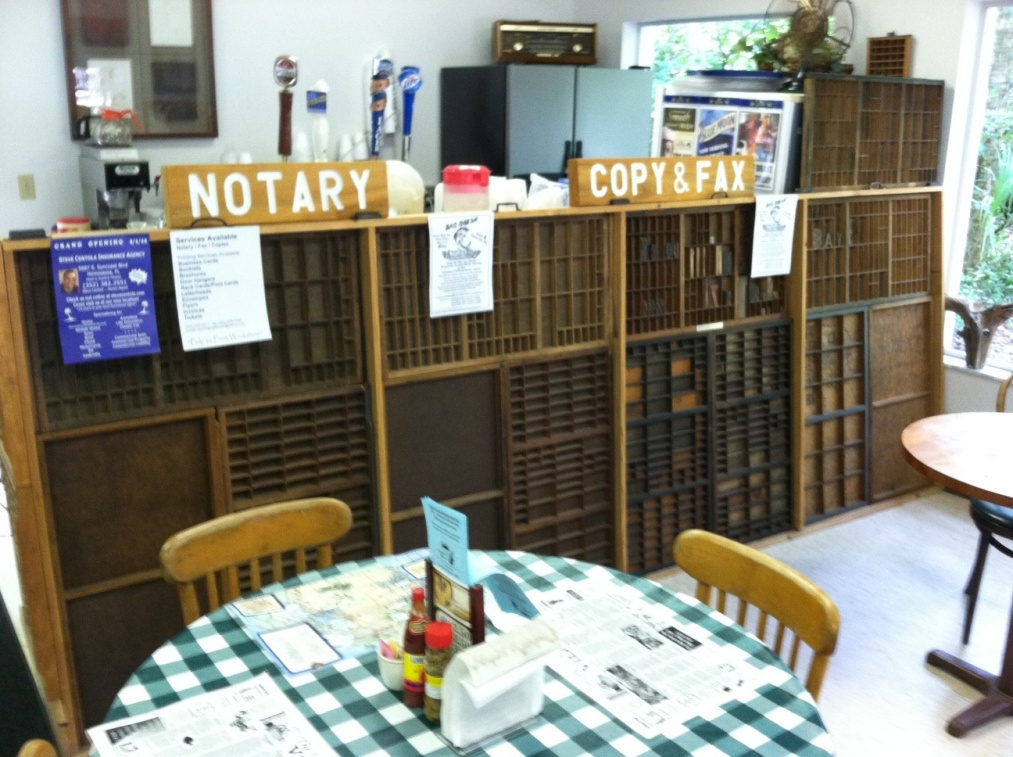 My friend Claudio earmarked this Bukowski poem and I think it really sums up all of the things that can get you  down (but also makes you think about the power of resiliency and strength people have with in them to keep moving forward). I gravitate to darker narratives and empathize with people who are struggling to get through the day. When I read this-it hits a  chord.

My goal in trying to communicate messages and meaning that is channelled through others trying experiences is where I think I am  most useful in my own art practice. I think of this poem daily-when I hear about the small and large  tragedies;   Brunswick youth killed in an auto accident on the night of their graduation, close friends of mine divorcing, people losing their homes, or a shoelace breaking at the most in opportune time, and somehow it makes the relational mythology universal-and  all of us seem a little more connected.

a woman, a
tire that’s flat, a
disease, a
desire: fears in front of you,
fears that hold so still
you can study them
like pieces on a
chessboard…
it’s not the large things that
send a man to the
madhouse. death he’s ready for, or
murder, incest, robbery, fire, flood…
no, it’s the continuing series of small tragedies
that send a man to the
madhouse…
not the death of his love
but a shoelace that snaps
with no time left …
The dread of life
is that swarm of trivialities
that can kill quicker than cancer
and which are always there –
licence plates or taxes
or expired driver’s license,
or hiring or firing,
doing it or having it done to you, or
roaches or flies or a
broken hook on a
screen, or out of gas
or too much gas,
the sink’s stopped-up, the landlord’s drunk,
the president doesn’t care and the governor’s
crazy.
lightswitch broken, mattress like a
porcupine;
$105 for a tune-up, carburetor and fuel pump at
sears roebuck;
and the phone bill’s up and the, market’s
down
and the toilet chain is
broken,
and the light has burned out –
the hall light, the front light, the back light,
the inner light; it’s
darker than hell
and twice as
expensive.
then there’s always crabs and ingrown toenails
and people who insist they’re
your friends;
there’s always that and worse;
leaky faucet, christ and christmas;
blue salami, 9 day rains,
50 cent avocados
and purple
liverwurst.

or making it
as a waitress at norm’s on the split shift,
or as an emptier of
bedpans,
or as a carwash or a busboy
or a stealer of old lady’s purses
leaving them screaming on the sidewalks
with broken arms at the age of 80.

suddenly
2 red lights in your rear view mirror
and blood in your
underwear;
toothache, and $979 for a bridge
$300 for a gold
tooth,
and china and russia and america, and
long hair and short hair and no
hair, and beards and no
faces, and plenty of zigzag but no
pot, except maybe one to piss in
and the other one around your
gut.

so be careful
when you
bend over.